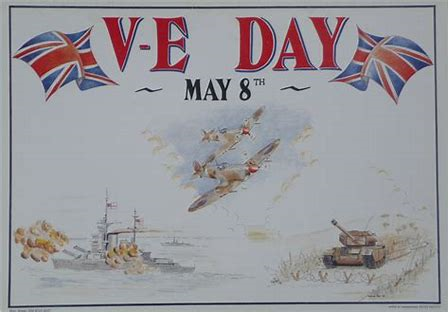 This coming Friday, 8th May, we celebrate the 75th anniversary of VE Day or Victory in Europe Day, to commemorate the day on which the Allied forces accepted the unconditional surrender of Nazi Germany, thus bringing the war in Europe to an end.  It is important to remember that the war continued in the Far East and was not brought to an end until Japan surrendered on the 15th August 1945, an anniversary which will be commemorated later this year.

VE Day was the cause of huge rejoicing, and signified the beginning of the end of five long years of fighting, with huge loss of life amongst the armed forces and civilians on both sides.  The British Legion are organizing several events to commemorate this very significant anniversary, and there is a link to the British Legion website for you here.  Also a link to the  Church of England page with liturgy for VE Day and a link to the Service of Thanksgiving held in Westminster Abbey in 1945.  A couple of parishioners have contributed their memories of the very first VE Day which are fascinating and can be viewed here, and Rev Julie has researched some wonderful prayers which you can use at home, maybe light a candle and say one of these to give thanks for all those who suffered so that we might live in peace and freedom.

This site uses Akismet to reduce spam. Learn how your comment data is processed.

This website uses cookies to improve your experience while you navigate through the website. Out of these cookies, the cookies that are categorized as necessary are stored on your browser as they are essential for the working of basic functionalities of the website. We also use third-party cookies that help us analyze and understand how you use this website. These cookies will be stored in your browser only with your consent. You also have the option to opt-out of these cookies. But opting out of some of these cookies may have an effect on your browsing experience.
Necessary Always Enabled
Necessary cookies are absolutely essential for the website to function properly. This category only includes cookies that ensures basic functionalities and security features of the website. These cookies do not store any personal information.
Non-necessary
Any cookies that may not be particularly necessary for the website to function and is used specifically to collect user personal data via analytics, ads, other embedded contents are termed as non-necessary cookies. It is mandatory to procure user consent prior to running these cookies on your website.
SAVE & ACCEPT
Social media & sharing icons powered by UltimatelySocial